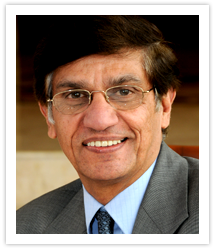 Pradeep kashyap, Founder MART, is known as the father of rural marketing in India. He is recognized as a thought leader and is a regular speaker at CEO forums in India and abroad. He has been Marketing Advisor to Ministry of Rural Development and has served on Prime Minister Office and Chief Minister Committees on rural development. He is a World Bank and United Nations consultant. He was Chairman, Khadi Commission National Marketing Committee and member of the NABARD and SIDBI national advisory committees.

He has worked in the corporate sector for the first 20 years with MNCs like EXIDE, BOSCH & DENSO, and the next 20 years as a rural development and marketing advisor. He has worked relentlessly to create tens of thousands of livelihoods for rural poor through collective marketing, public private partnerships and the 300 Gramshree melas organized in 75 cities for sale of rural products. He co-created Project Shakti with Hindustan Unilever to appoint 46,000 poor women from micro finance groups as company dealers and has pioneered another low cost, last mile rural distribution model by appointing village entrepreneurs on bicycles for many FMCG and durable companies. He has also pioneered the concept of ‘Inclusive Marketing’.

Mr. Kashyap was the only speaker from India at Cannes Lions 2008 among the 50 Global speakers that addressed the 2,000 participants in France, where his topic was ‘Rural India: The Emerging Market’. He was also the key note speaker at an International conference in 2010 on inclusive marketing in Chicago. He has given talks at University of Cambridge and London Business School, UK and was recently invited to speak on ‘MART – An Endearing Organisation’ and ‘Freedom from Poverty’ by TEDx DECCAN and TEDx Knowledge City respectively.

He is a recipient of the Jamna Lal Bajaj Endowment Award 1991 for his outstanding contribution to rural development. He also currently holds the position of President, Rural Marketing Association of India.

Please click here to get an overview of his contribution as a thought leader.

Company presentation
How can we help you?

Contact us at the MART office nearest to you or submit a business inquiry online.

Pradeep you are a true pioneer

Pradeep, over many years, has demonstrated his commitment and dedication to understanding rural marketing especially through his research and consultancy company, MART. He is one of the very rare individuals who blends theory and practice.

Your Rural Marketing book has now truly become a Bible for all companies who are keen to capture the potential of the rural market of India
as part of their business strategy.